Two nights left, and it’s time to move the tent again! Today, we’re heading to Jura. Which turns out to be one of the best islands we’ve made it so far. A lot quieter than Arran and Islay, but bigger and more scenic than Gigha. I like that the ferry from Islay drops you off in the middle of nowhere, 7 miles from the village. Good thing it’s lovely weather for a cycle.

Cycling up from the ferry port. 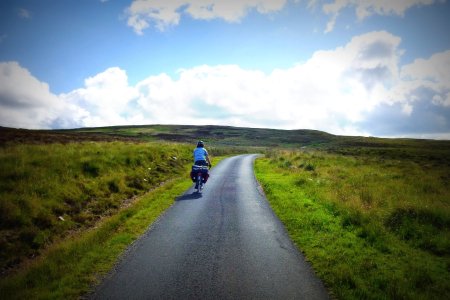 My legs are getting somewhat tired!

The Jura Hotel is pretty nice and allow camping on the lawn free of charge (probably knowing full well that we’ll spend enough money in the hotel bar!). It’s a pretty scenic spot and right next to the Jura Distillery

Time to add to my new whisky collection

Palm trees in,
the Hebrides!

Contrasting with the plam trees are the Paps, some impressively bleak mountains. 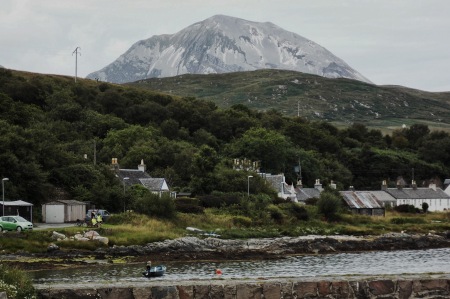 Somehow, I don’t think we’ll be making it up there with our bikes.

I bet the view is nice though.

After lunch and pitching our tent, we headed north to explore the island a little. We couldn’t get that far though as the road quickly deteriorates and our road bikes aren’t really designed for rough terrain (I’m probably just being a bit paranoid though, but I burst a tire a the month before cycling down a stony path ). 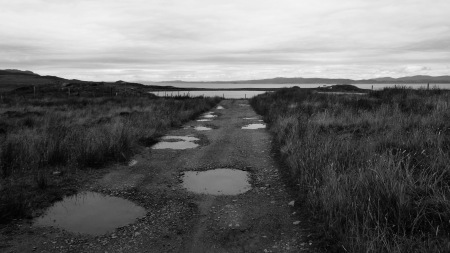 We eventually made it down to the coast and had a picnic style early tea. There wasn’t much in the way of a beach, but I did see a heron or something. Hard to make out exactly what it was though.

Getting back from the coast to the road was a little tricky: on the way down we had gone through a gate with “Beware of the bull with calves” sign (or something to that effect). And between us, and the road (where we had left our bikes) was a herd of cows and a randy bull. To make matters a little more interesting, the ground was less ground and more bog. The driest routes involved following the tracks recently made by the cows. The downside of this plan was that the tracks either led in the opposite direction, or straight towards the herd of cows. You know, cows are pretty big, and a “moo” can be quite intimidating. We ended up taking a pretty torturous route around the angry cows and ended up with soaking wet feet. No doubt our shoes were pretty smelly too, but luckily, that’s not so much of a problem for me (not having a sense of smell).

The evening was spent drinking beer barefoot in the hotel bar.

The last day. First off, a seven mile sprint back to the ferry port, hop over to Islay, just in time to get onto the larger, once-a-week, ferry to Colonsay. When we arrived we cycled to the far side of the island and pitched up at Kiloran Bay. En-route we say quite a few birds of prey hovering in the sky. Sadly, I really don’t know very much at all about bird spotting. 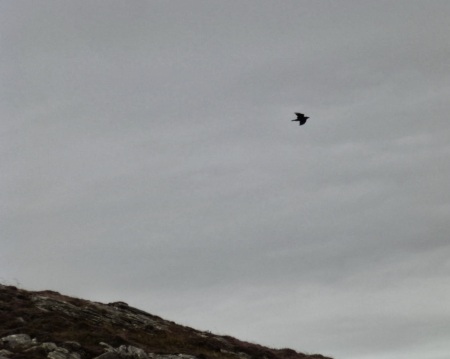 Anybody good at bird spotting.

When we arrived at Kiloran Bay, the view was pretty fantastic, but sadly, the sun wasn’t coming out to play.

A not very good panoramic photo. Can you spot our tent?

Heading off to get some lunch, and we hit a problem: one of Moz’s bungie cords snapped without him noticing. He carried on pedalling for a bit, which caused the cord to get well and truly stuck in-between his gears. And here’s why it’s taken 4 months to write this little blog…. I’ve not been exactly sure how to write up the last part. As, while on one hand, the people of Colonsay House did give moz a hand with his bike chain/bungie problem, they also said some pretty stupid things. (I think) Moz ended up talking to the son of the guy who owns the island, or something like that, who turned up to be pretty anti-camper, on the grounds that we don’t contribute anything to the “fragile” local economy. While, was a little rich when we’ve just spent £20 in his over-priced cafe. And then spend spent another £20 in the local ship to buy food and some beer from the island’s micro-brewery.

Whoever the guy was, I don’t understand his mindset.

He also said that, after we mentioned were we were camping, he wasn’t that happy with the location of our campsite. And asked us to move somewhere out of sight. By the time we eventually got back to camp, it was around 5pm, and the weather was overcast with some drizzle. We had a wander up and down the beach and decided that the only people who we were ruining the view for were: ourselves. So we decided to stay put. There was no sign of anybody else.

Ok, I exaggerate a bit. An hour later a family of three turned up for half an hour or so.  I got the impression (backed up by chatting to them on the ferry the next day) that they couldn’t care less about our tent. I think the dad was too busy enjoying himself building dams along a small burn.

I decided to have a go swimming. I didn’t last long. Man, I had forgotten how cold the Atlantic was. With not even a hint of sunshine for warmth, I gave up pretty quickly. Luckily, I had just the thing to warm up up:

Heading home the next day, we stopped at the other cafe on the island, down by the ferry. Which was, err, amusing: the service managed to reach Basil Faulty levels of rudeness. The woman running the cafe apparently had nothing but contempt for anybody troubling her for a cup of coffee or some breakfast. Perhaps it was all some elaborate joke?

And, then we went home. Given that I’m writing this last half of this post in January 2014, I can’t remember much else worth mentioning. It was another great trip, although with a bit of a sour taste at the end as Colonsay was pretty unwelcoming. I can’t help but compare it to Gigha, where the people were really friendly and welcoming. Go there instead!

This entry was posted on Thursday, January 2nd, 2014 at 8:40 pm and is filed under General. You can follow any responses to this entry through the RSS 2.0 feed. You can leave a response, or trackback from your own site.