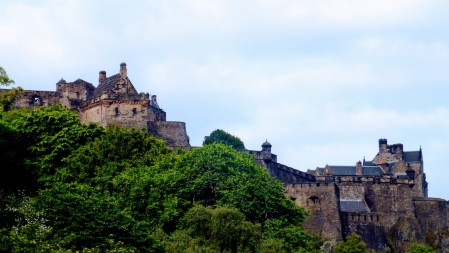 An early (very early) morning start as the sleeper train pulls into Edinburgh Waverly first thing in the morning. We get the bikes unloaded and head up in to the old down to meet Louisa for breakfast at one of my old favourite cafes. I miss my days living in Edinburgh at working at the Informatics Forum.

Still, we can’t hang about too long: we have to cycle to England today. Sounds like a long way when it’s put like that doesn’t it. Eeek. 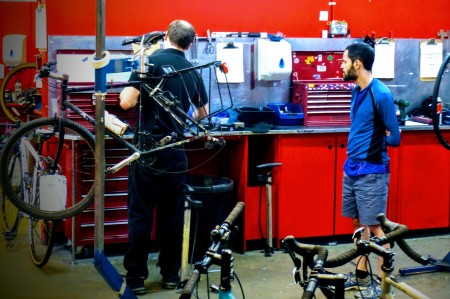 The first port of call is the Edinburgh Bicycle Co-op so we can get Micha a new inner tube (or two). Luckily, it is just on the other side of the Meadows, only a short windswept walk with Micha’s flat.  I stock up on some extra bits and pieces while I’m there (a new chain tool and a spare tyre lever).

We’re all done by 10:30am, and it’s time to head out, back the way we came through the Meadows and down to Holyrood Park. We quickly hit our first obstacle: 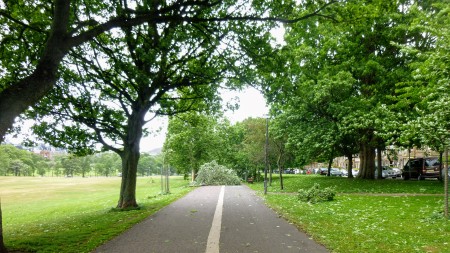 That wasn’t there half an hour ago.

I guess the weather forcast wasn’t messsing about when it said it was going to be windy.

While I know Edinburgh pretty well, I’ve never cycled out this way so we’re letting Google Maps guide is: it worked really well in Canada and the US. Turns out, it works considerably less well in the UK and decides to take us along a really silly route around Arthurs’s seat. I think the directions could only have been less useful if they had insisted that we cycle up and over the summit of Arthur’s Seat. We’re not even out of the city and we’re on trails not made for road bikes. Sigh. 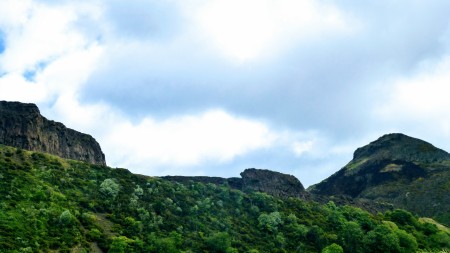 The route makes a bit more sense once we get out of Edinburgh and it looks like we’ll be following National Cycle Route 76 too Musslebourgh. Along the coast, the wind is really picking up and staying balanced prooves a little tricky at times. Luckily we’re mainly on proper cycle paths!

It it wasn’t for the wind blowing sand in my eyes, it would be really nice weather!

From Musslebourgh, we head along the coast and through Prestonpans, Cockenzie, and then turn South and Longniddry, hoping to find a nice cycle route to Haddington. 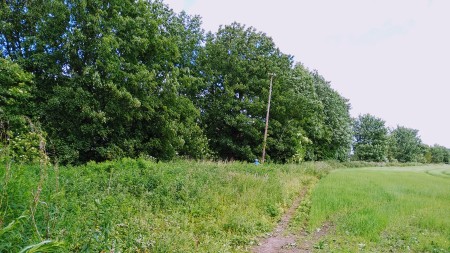 Somewhere around here is National Cycle Route 76. Did I already mention that the sign posting on these routes is terrible?

After cycling through a lot of stinging nettles, we eventually make it on to the proper cycle path. Cycling through stinning nettles in shorts is not fun, and this won’t be the last time we have to do it 😦 At least the pain is a nice distraction from acheing muscles. Micha, ever the cheery optimist, raises our spirits by pointing out that “At least it wasn’t poision ivy. That’s a lot worse.” 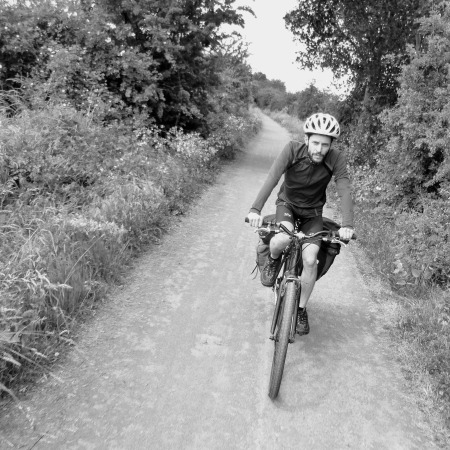 Paths that are not overgrown with stinging nettles are a lot nicer than those that are. 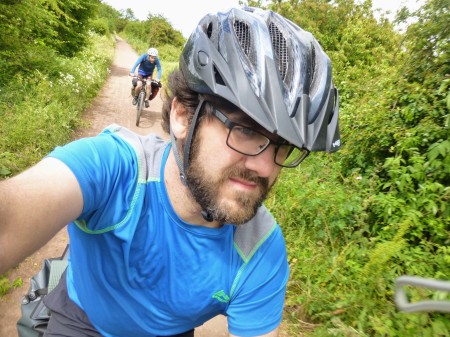 We stop at Haddington for a pub lunch, feeling like we’re making pretty good progress. Next up, it’s onwards to East Linton, then we hit the coast again at Dunbar. 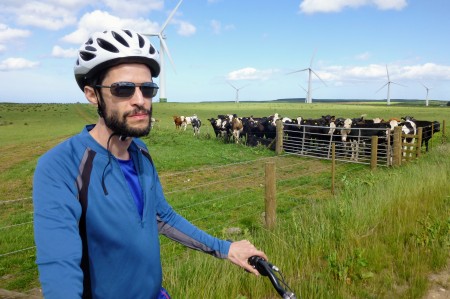 Thinking up captions is hard. Micha, cows and windmills! 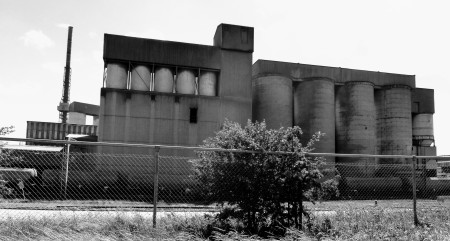 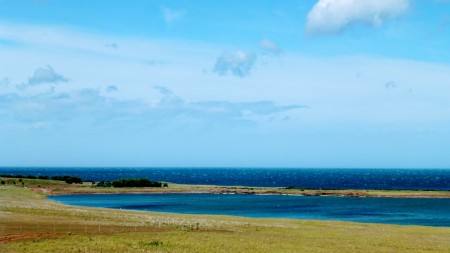 We stop and Dunbar for some coffee. Now it’s a simple matter of cycling in to England, have some food in Berick upon Tweed, then 10 more miles south to our planned campsite. What could go wrong? 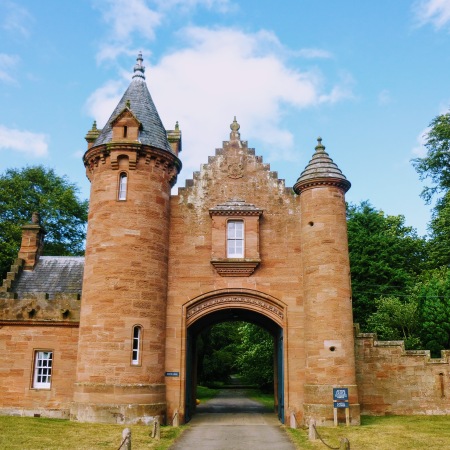 The gatehouse to Ayton Castle.

Somewhere after Ayton, things go wrong. Google, in it’s infathonable wisdon, has decided that the best way to cycle over the border and in to England is along the A1. 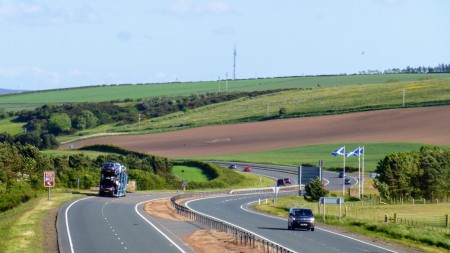 What happened to National Cycle Route 76? I assume we missed a junction or something. You’d think they would signpost something like that, to help clueless men on bicycles avoid busy roads with lots of lorries. And why does Google Maps think this is a good way? I know it knows about the cycle routes, as it’s been doing a pretty godo job of calling out directions for it all day.

Oh well. Doesn’t look like there’s much choice now: there’s a lot of ground to cover and the only so many daylight hours left. 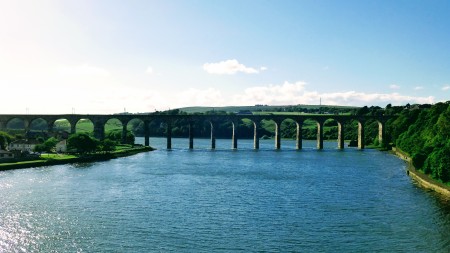 We make it in to England, and Berwick, and breath a sigh of relief. We have a look around for somewhere nice to have a coffee and a bite to eat, but it looks like it’s a little late in the day and everywhere is closing. Plan B: cycle to the nearby supermarket and pick up some supplies to eat at the campsite, then head straight there. It’s less than 10 miles.

It’s less only 8 miles give or take. Well, give, as we’re no way going down the A!. We’ll follow those signs for National Cycle Route 1. It’s a little longer, but it should be less dangerous and an easier cycle, right? 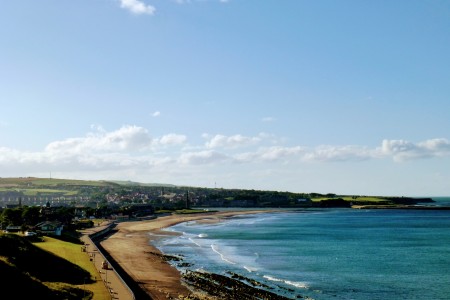 Looking back North to Berwick.

Wrong, again. I suspect this might be the worse (in terms of a path) part of the National Cycle Network. If I had a mountain bike, it would be great. But I don’t. On a fully loaded tour bike, the path is borderline unridable. Several times,  parts of our luggage come flying off the bike after we hit pot hole after pot hole.

Progress is slow. And then Google Maps suggests we take a detour over some gravel/stone tracks. A different type of cycling hell. This can’t be good for my tyres. Oh, and a private level crossing. I’m not sure we’re meant to be crossing the railway here, but it’s an hour until sunset and our progress feels like some version of hell in which every mile the road gets worse.

And I’m getting tired and cranky. Probably no more than five hours sleep last night, after a tiring and stressful day (night time cycling through London with a flat was not fun). And while today has been a lot more relaxing, after 70 miles, I’m knackered.

We finally get back ontrack cross over the A1 to the quiet B road to our campsite. less than four miles to go, and we’ve got half an hour until sunset, so all is well. And did I mention that we managed to find space for a four pack of Elvis Juice (my current favourite BrewDog beer). I told you that we picked up some supplies in Berwick. Pitch the tent in a nice scenic spot, and then some nice beer. Everything is going to be..

Oh shit. Now it’s my turn to have a puncture. I guess that terrible path really was too much for my road tyres. Well, good thing I have spares, and a full toolkit. Except, except it’s going to be getting dark soon, and while I have everything I need to swap the inner tube, and I know what to do, I know that it takes me a while to get the road tyres off. I really don’t fancy my chaces getting this done before darkness. And I don’t fancy pushing my bike for miles. It’s uphill.

Then, Micha, has a genious idea. He remembers spotting an inn just off the A1. Literally, a few minutes away. Why don’t we just stay there?

Now that, my friend, is a good idea. I guess this is what was meant to happen.

I don’t even make it through my second Elvis Juice before falling soundly alseep.

This entry was posted on Friday, July 6th, 2018 at 10:11 pm and is filed under General. You can follow any responses to this entry through the RSS 2.0 feed. You can leave a response, or trackback from your own site.