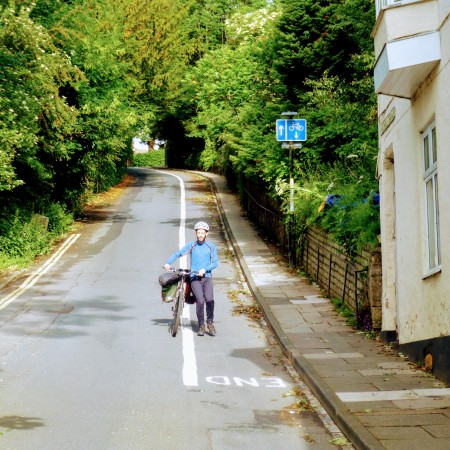 The plan was to get up and on the road nice and early: our aim was to get to Whitby and we were a little concerned about how far away it was. We had really expected to get in to Durham around mid afternoon yesterday, rather than 8pm! The route I had mapped out was mostly following a cycle route down to Middlesbourgh, and we had no idea if it would be smooth riding, or broken path that would ruin our tyres.

Talking about tyres… yes, that early start didn’t happen as Micha had another flat. 😦 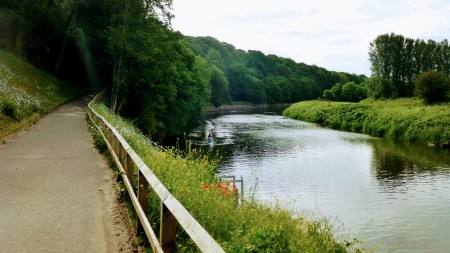 Still, we got it swapped for a spare reasonably quickly, and headed out of Durham along the river, and then on to our old friend, National Cycle Route 1.

I guess we’re going this way then

We’d had a bit of a disagreement about routes and destinations last night. All those flat tyres, and feeling pretty tired, was causing quite a bit of stress. I was keen to stick to the cycle route, as it looked like a pretty direct route south from Wingate to Middlesburgh. Micha was, quite rightly, pointing out that some of the cycle routes are pretty rough tracks and can  be hard work to cycle on, and favoured sticking to the road. It turned out that he had nothing to worry about, as this part of the nat. cycle route is really good: 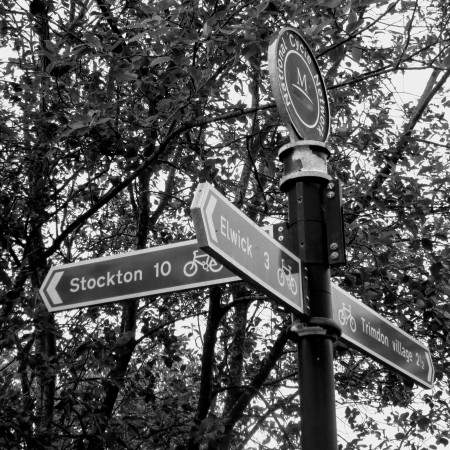 A rare signpost for cyclists. Some more of these would be really helpful.

Ah perfect. a cafe. time for coffee. and cake. and more coffee.

We stopped off at a bike shop in Stockton so Micha could stock up on more inner tubes, and then planned to stop for lunch somewhere in the city centre, along the waterfront. Seems safe to assume that there would be some nice cafes there.

This pretty much sums up my memory of Middlesbourgh

It turns out that Middlesbourgh has a pretty good cycle network through the city, and we accidentally ended up south of the city before thinking about lunch. So a picnic in a park was in order. I can’t say the same about Coulby Newham. We tried following the suggested routes, but ended up a little lost.

This was far more confusing than it needed to me.

As we headed towards Great Ayton, we could see the moors rising up in the distance: it was looking like it was going to be a tough afternoon and evening crossing them. Which meant only one thing: we shoudl first stop a ta nice cafe in Great Ayton for more coffee and cake. Then up in to the moors! We’d spent a while trying to work out the best route, avoiding the busy A roads whic.h we had been warned about. So instead, we were heading into the countryside 🙂

I’m enjoying the lack of cars! 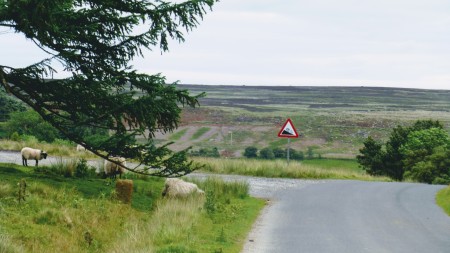 This part of the country is deceptively hilly. 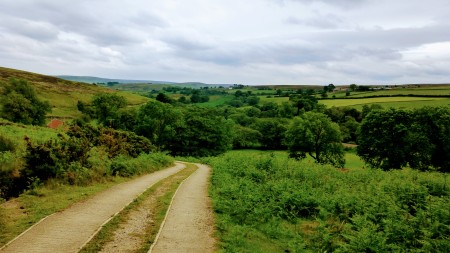 We have certainly succeeded with avoiding the A road to Whitby and getting out into the more remote areas of Yorkshire.

As we road into Danby, Micha waved to and indicated he had another flat tyre. Yes, really. Another flat tyre. Luckily, there was a handy village pub for me to relax in while he did his thing. 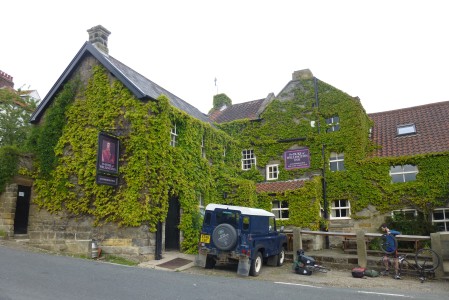 He’s getting faster and faster at doing this!

Tyre changed, and off we went! One more big push and we’d get to the coast and in to Whitby in time for some food, then a nice evening cycle up to a campsite above Robin Hood’s Bay. The hill outside of Danby looked like it is would be a struggle, but it was probably doing to be the big climb of the day, so better to get it over with sooner rather than later.

Well, that didn’t go so well.  Just as I’m getting started up the big, unfriendly hill, I hear a swearing from Micha. Although this time, he hasn’t burst his tyre, oh no. His chain has snapped! Well, not to worry, I have a chain tool for that! Back to the pub and we can fix it.

Oh. it, err, looks like, at one of the many stops to change a inner tube, the chain tool must have fallen out of my toolkit. And is lost. And we’re in the middle of the moors. And it’s already late afternoon.

I decide to get a beer while we swear at each other for a while.

As luck would have it, Danby has a very small village train station. It’s about five minutes walk away, and the last train of the day is due in about 10 minutes.

I drink my beer quickly. To the station!

We’re not cheating and taking the train to Whitby and avoiding the rather large, steep hill. We don’t have a choice.

On one hand, I’m quite annoyed at the bad luck we’ve had. I was enjoying the cycle through the moors. Perfect weather and beautiful countryside. But on the other hand, sitting in the pub and swearing at Micha over a beer was a lot more fun than cycling up that steep hill (sorry Micha). And if we’re going to break down in the middle of the moors, doing it fives minutes walk away from a train station in perfect time for the last train is a good place for it to happen.

It could have been a lot lot worse.

And we bump in to some other cyclists on the train, and borrow their chain tool to do a makeshift repair. So we’ll be able to do the final strech up in to Robin Hood’s Bay after all.

But not before having some fish and chips (and more beer) at Whitby.

Whitby looks like a nice town. Shame we don’t have longer to explore.

A replica of the Endevour

After our meal, we head off for the last 5 miles or so up to a campsite south of Whitby. We go pretty slowly, as Micha’s worried about putting too much strain on his chain (which is now missing a few links). A get there just as dusk is closing in.

Back out into the countryside!

I’m a shoe-in for Wildlife photographer of the year 🙂 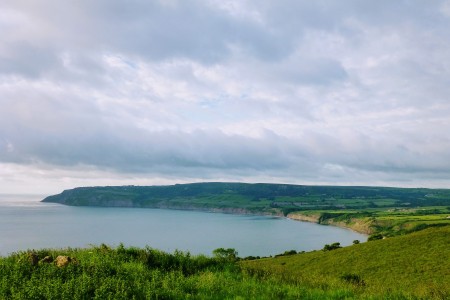 With a bit of luck, there should be a couple of cans of beer at the bottom of one of the pannier bags…

This entry was posted on Sunday, September 16th, 2018 at 10:44 am and is filed under General. You can follow any responses to this entry through the RSS 2.0 feed. You can leave a response, or trackback from your own site.