Setting off from Arran

Up early, and off to catch the first ferry over to Kintyre which despite being part of mainland Scotland, feels a lot more remote than Arran. (I guess Arran really isn’t very remote at all, and is fairly close to Glasgow when you think about it.) The road signs are caked in decades worth of dirt and the ferry drops us off in what appears to be the middle of nowhere: the ferry terminal consists of a bus shelter and a portaloo.

It feels a bit like going back in time.

So, with no reason to hang about we head west: up and over the peninsula. The hills weren’t too steep, the wind wasn’t too bad, and it was dry. And beautifully quiet. Looking back, the view over to Arran was pretty nice too.

Arran in the distance

A panorama of peace and quiet

Upon reaching the west coast we realised we had a minor problem: neither of us had any cash, and we didn’t know where to find a cash machine beyond making a 12 mile detour to Tarbert. After umming and ahhing a bit we decided to ask at the Kennacraig ferry terminal, which being larger than the Claonaig port, was actually staffed. We managed to pick up our ferry tickets for Gigha there, and were informed that we should be able to get cash-back without a problem on Gigha. So, with that sorted, it was time to head south along the coast road for 15 miles. The cycle was pretty uneventful. We got soaked while cycling up a hill, but then had a great ride down from the top into the sunshine. I saw some large dragonflies, which are really hard to photograph, and some sheep with some cool horns. 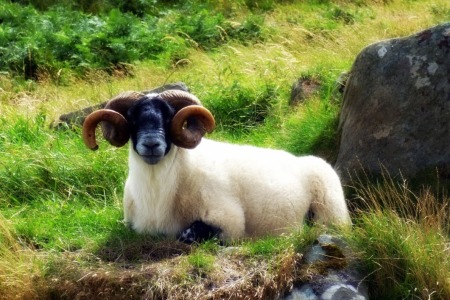 We made it to the next ferry terminal for 12:30, which was a little frustrating as the ferries left on the hour every hour except for 1pm. So we had some time to kill. Luckily there was a cafe nearby (the first one I’d seen on Kintyre).

First coffee of the day at 12:30. How on earth am I managing all this cycling with no morning coffee?!?

A leisurely lunch later, and a short hop across the sea on the ferry and we’re on Gigha. Which turns out to be a really nice little island. The friendly guy in the shop suggests we head up to the north west of the island for a good camping trip, and then offers to put some beer in his fridge for us to pick up later. Champion. So, we head up to the north along the island’s only road, and run onto a traffic jam of cows.

We end up finding the spot the man in the shop had suggested, although it turns out to be a little off the beaten path 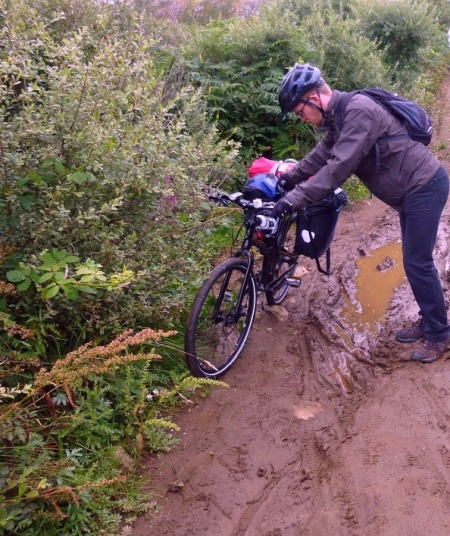 Moz appears a little scared of getting muddy.

But it’s worth the effort, and turns out to be our best camping spot so far. Shame it’s not sunny by I suppose you can’t have everything. We pitch our tend on a small strip of land which connecting the island to a little hill.

Getting closer to our tent!

The evening was spent having a delicious (if slightly expensive, but I didn’t mind too much as we had an excellent camping spot for free) meal at the island’s restaurant, before heading back to the campsite to laze around the beach drinking beer.  All in all, a really good day! 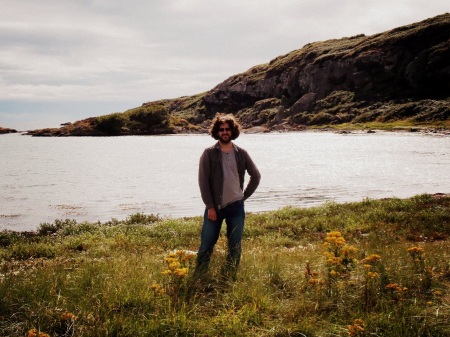 Still in need of a haircut.

You’ll notice that Moz and I never appear in the same photo. 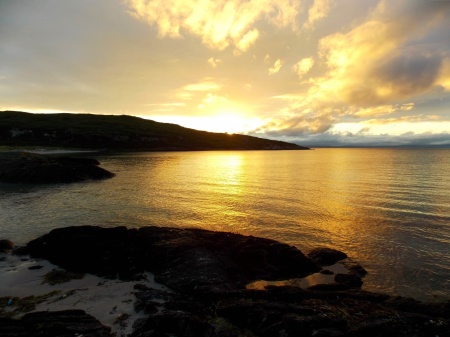 And the sun sets on our two little beaches.

Eventually, the sun set, and it was close to pitch black. Time to call it a night. Sadly, there’s a downside to pitching your tent on machair in the middle of the aftertoon: we ended up on top of some angry hoverflies. A couple of them appeared to be stuck underneath the tent and kept making angry buzzing noises. Or rather, their wings vibrating against the floor of the tent made noises. Either way, they were surprisingly loud and we were a little worried that we had pitched up on top of a nest. Luckily, this didn’t appear to be the case, and they quietened down after a while.

Sunday. Our plan was to make the 13:00 ferry from Kennacraig to Islay. Unfortunately that was at the other end of Kintyre, while we were on Gigha, and we had been informed yesterday that the 9:30am Sunday ferry from Gigha to Kintyre only runs if it’s booked 24 hours in advanced. Either this wasn’t mentioned in the ferry timetable, or, perhaps more likely, we had simply overlooked it. Oh well, the only thing to do was to cycle down to the jetty and hope it turned up. If not, we’re have to wait until 10:30, leaving around 2 hours to get up to Kennacraig. Which wasn’t unthinkable, as it had taken 2 and a half hours the other day. But still, we’d rather not have the added pressure.

We arrived at the Gigha jetty in plenty of time, but sadly no sign of a ferry. So instead, we sat down and started breakfast. Just as we started, the ferry then appeared from around the coast, and we had to frantically pack everything away again and rush down to the jetty, making it just in time!

It turns out we needn’t of worried about getting to Kennacraig anyway. With fresh legs,we managed to make it there in under two hours, given us plenty of time before setting sail for Islay. We arrived in Port Askaig and were greeted by a nasty hill: oh well, best to get it done and out of the way right? Then then cycled round to the campsite at Port Charlotte. This turned out to involve a lengthy struggle against the wind blowing in the wrong direction, but we got there eventually, at which point, the bulk of the cycling was done. On the way, we passed some highland cattle, which cheered Moz up as apparently he’d never seen any before.

The campsite at Port Charlotte was ok. Facilities were top-notch (and after wild camping and a lot of cycling, the hot showers were very much welcome!) but it was a little on the expensive side and the location just didn’t compare to spot Moz and I found for the previous night. Although, in its favour, there was a hint of a scenic rainbow.

Almost makes the wind and the rain worth it!

We decided we’d stay put for two nights, so we could spend tomorrow relaxing without having to move the tent somewhere else. 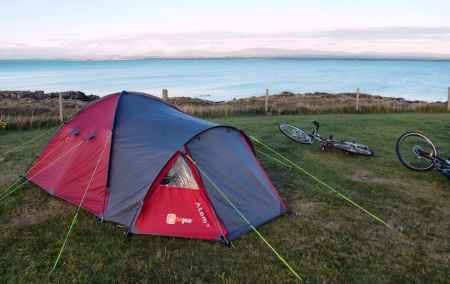 I’m getting used to camping by the sea, falling asleep to the sound of the waves.

Food tastes better when you cook outside. Perhaps.

After a well deserved meal, and then a nice long sleep, it was Monday! With more hot showers! And a leisurely start to the morning with no need to pack up the tent. We eventually set off for Portnahaven, a scenic little village 5 miles or so west of our campsite. En route, we say some funny looking sheep!

There’s something funny looking about that sheep. 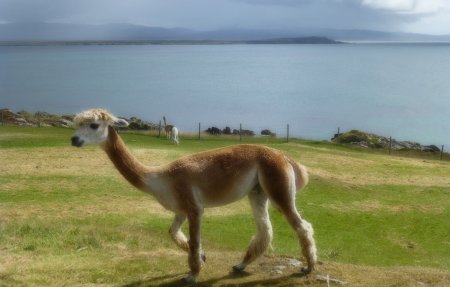 These llamas are surprisingly photogenic. 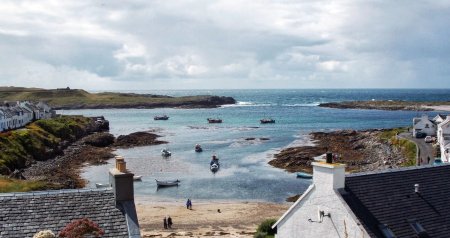 An attempt to be arty.

We figured a picnic might be a good idea so we wandered along to the local shop. Which turned out to be staffed by a hardcore Conservative who was on the phone warning party HQ that the island was in danger of being overrun by bleeding liberal hippies. Very surreal. We quickly left, without buying anything and headed to the village pub and had lunch there instead. 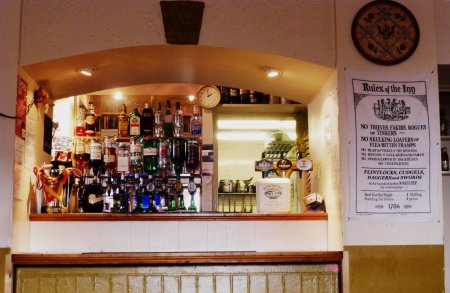 Oh, and we also saw another seal.

After a late lunch and a beer, Moz headed back to the campsite while I decided to make the effort to visit one of the local distilleries. When in Rome, etc. Sadly, only their 10 year old whisky came in a small bottle (and buying a full sized bottle would take up too much space in my bag), but I at least got to try samples from a good number of their other whiskies. 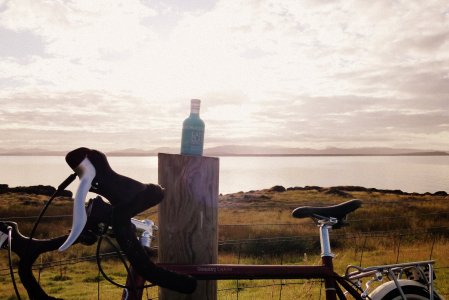 Small, but it will have to do.

When I arrived back at the campsite, I found Moz had taken the grand outdoors to heart. Almost going native and ready to start his own croft.

This entry was posted on Saturday, August 31st, 2013 at 2:49 pm and is filed under General. You can follow any responses to this entry through the RSS 2.0 feed. You can leave a response, or trackback from your own site.