This morning, we needed to decide if we were going to head to Mont-Megantic National Park, or b-line back across the Canadian-America border. Camping in the park was on our original plan, but I had realise that it was another 70+mile to get to the park from last night’s camping spot, and then tomorrow would be yet another 70+mile ride to get to Colebrook. Whereas, if we went straight to Colebrook today, it would only be 60miles.

Hey little fellow. Good morning to you too

We decided to postpone the decision until after morning coffee in a nearby town.

Maybe deciding to cycle another 70 miles will be easier after some coffee.

As expected, after several coffees, I decided that we should go for the long option. Sure, I’m a little worried my knee might give up. But what was the point of all that exercise if not to allow me to make potentially bad decisions? Onwards! 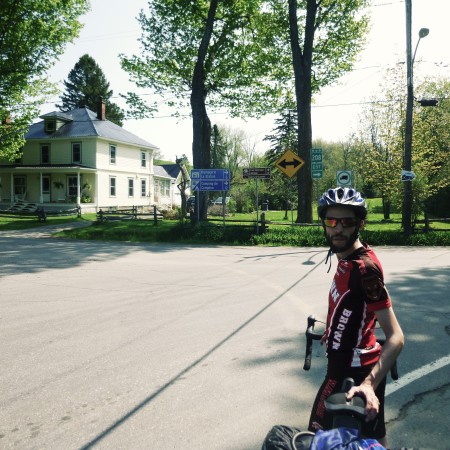 No Micha, we can’t take a detour to Fromagerie La Station. Yes, it does sound good, but we have to head off in the opposite direction.

Very quickly, my chief concern turned away from my knee, and to making sure I was drinking enough water. I’m really not used to doing so much exercise in 30degree heat, and we simply don’t have the luxury of seeking shade during the middle of the day! Onwards! 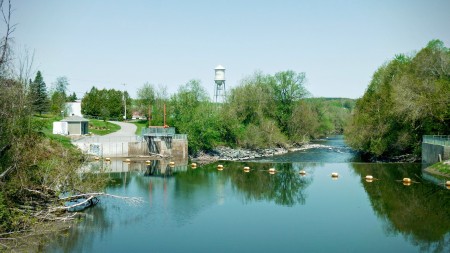 I forget which river this is. But doesn’t it look nice.

We were managing to just about go fast enough that we’d pass through a town or village every hour or so, and I took every opportunity to refill my water bottles. After reaching Cookshire-Eaton, the route basically was: cycle east for a long long time and don’t stop until you reach Notre-Dame-des-Bois.

One of the rare times in which I end up ahead and have to wait for Micha. Usually it’s the other way around.

Sadly this involved quite a lot of up hill. Then a little downhill. And then more uphill. Not least the road up into the last town. Yuck, that was a slog and a half.

I disliked this town, for no reason other than that last uphill.

The good news was that we got to the town in the early evening, which should give us enough time to get to the National Park before sunset! It’s going to be a bit of an effort, as I’m feeling really tired by now, but still, we can do it, we can do it! 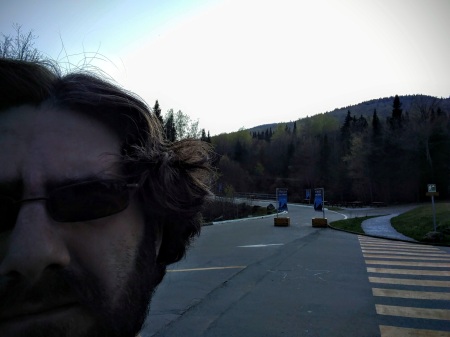 The light is starting to fade fast

Just as we’re starting to relax, as WE ARE ALMOST THERE, we hit a final hurdle. The campsites are in the middle of the forest, and the trail there is, well, more of a trail than a road.

This might be fun on a mountain bike, but not on a heavily loaded touring bike!

After a while, the trail got so hard going that we decided it would be faster to unload the bikes and just carry our bags up to the campsite. Probably a good move, as the sun was starting to set and we were knackered.

However, it was all worth it, as we say a litter of fox cubs!

In the end, we get the tent up just as it’s getting dark. Cook some food on the stove, and drink some whisky while watching the stars. It’s an incredibly clear sky. Sadly, I’m far too tired to stay up late stargazing. Maybe later in the trip!